will not be discussed in this blog post, sorry.  Bummer, right? You were so looking forwards to it, I can tell.

So what I will actually be discussing is the meaning of livers. You know, the organ? Yeah, that title? I made a typo, but was too lazy to change it. I had to come up with that whole “will not be discussed in this blog post,” which took me hours. Maybe it would’ve been better to just change the title, I’m thinking, even if it does take an immensely hard movement to reach out and move the mouse.

Well, not much I know on livers other than that they are necessary, but here’s a picture: 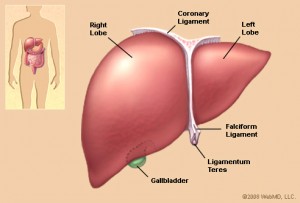 Take a look at that thingy called a gallbladder. Hmm. Wonder what that is.

Now, moving on from the topic of livers to a much less interesting topic:

I can’t find my writing notebook in which I have written all of three chapters of my book, and although I’ll probably find it tomorrow, it really would be tragic if I never found it. It’s small and the cover is a bunch of different sized and colored letters. Return to me for an amazing reward (pocket lint, a hairband, a gum wrapper, and the remains of an old tootsie roll).

And, again, moving on to:

Stephanie: Once upon a time, there was a girl. This girl was very special and magical. Extraordinary. She had amazing powers, unlike no other. Or so she thought.

Daniela: One very dreary day, this girl was sulking around her house. She was home alone, you see, so she couldn’t go outside to play in the rain (it was something she very much liked to do). When she was asking herself whether to watch TV or eat a snack, the doorbell rang. Going against everything she had been taught by her overprotective parents, she opened it. At the bottom of the steps in front of her house stood a very old-looking cow, a flower planted in a shoe, and a very big package, about the size of a small sofa.

Stephanie: She just stared at it in utter (heh cows) confusion and yet amazement. The cow walked in through the door past her, so she picked up the flower in a shoe and hauled in the huge package. The girl assumed the flower in a shoe was a gift, so she looked left and right outside, but seeing no one, closed the door and set it a side. She wished to express her thanks for her odd gift, but there was still the package and an old cow. She stared at the old cow which looked her straight in the eye and said ‘Moo’, just like a little kid would imitate a cow using that sound. But now her full attention was on the package and she started to peel off the tape.

Daniela: Five minutes later she deeply regretted it; a loud, screeching verse of “Old McDonald” greeted her as at last the cardboard flaps fell open. She put on arm around her head to try to block it out as she peered inside, but, alas, the sound seemed to penetrate almost anything. Inside the box was a small radio, which seemed to be what was emitting the horrible sound- she was surprised it could sound so loud and yet not be heard through the sides of the box. Along with the radio she found a watch, a dirty sock with a few rocks inside it, and a block of slowly melting ice with what seemed to be a parrot frozen inside. “Strange,” she muttered, five seconds before a loud crash was heard from behind her, and she turned around to find that the refrigerator had fallen on top of the cow and that half the kitchen was now on fire.

Okay, that’s it. One more thing: I wish to express my annoyance that WordPress underlines my name in red like it’s misspelled. It is a name, for gods’ sake, and it definitely does not look at all like the name Melanie (which is a spelling suggestion and is not, by the way, underlined).

‘S about it, so bye. Stay calm. And alive. Drink lemonade. Bye-

3 thoughts on “The Meaning of Life”