Skip to content
Daniela ParisAugust 1, 2015 stories, Summer 2015 2 Comments
I watch Zachary’s blue eyes through the glass of his too-big glasses as he leans down to look at the writing on the briefcase and brush my dark blond hair behind my ear.
I’ve never been this close to an actual boy before. Dad and my brother and cousins don’t count, they’re all in my family and none of them are as beautiful as him. Oh, did I actually think that? The only reason I’m this close to him is because I woke up in a strange place with a briefcase handcuffed to my wrist. Maybe I won’t see my family again.
I swallow. Maybe I shouldn’t think about my family right now.
My eyes jump to his to make sure he didn’t sense my thought or see me swallow or blink away the tears, but I’m sure he didn’t. There is no difference in his expression.
I lean a little bit close to the briefcase to try to read the words, a strand of my hair falling into Zachary’s face. “What does it say?”
He blows my hair away and leans closer.
A second goes by. Zachary looks up at me, a strange look in his now-wider eyes. “Is your last name Lowry?”
My eyes freeze on him for a second, then trail down to his fingers. They’re absently rubbing back and forth over the black messy writing on the briefcase. I take it from him, pulling hard, forgetting for a second that we’re chained together and wrongly judging how hard Zachary is holding the briefcase. It happens at just the wrong moment, just when the whole train jerks and thunder goes off outside.
Zachary lands on top of me and so close that we’re nose to nose. I blush. He laughs, lifting up one of his hands off of the ground to brush his bangs to the side, “Hello.”
“Sorry.” I mumble, pushing him off and raising the briefcase to my eyes to read the words.
I read them again.
Then a third time.
For Zachary Saunier and Dawn Lowry -Open me
“Zachary Saunier?” I ask him, and he nods. I turn back to the briefcase and try to open it but fail. There’s no lock- I just think it’s glued shut. “I can’t open it.”
Zachary takes it from me and jams it against the floor, hard and loud.
“ARE YOU CRAZY?”
He looks at me with a strange look in his eyes. “I,” he informs me, “am trying to open it. Isn’t that what you wanted?”
“He- the man- he’ll hear us! And kill me! And you!” I gasp, just as the train jerks again. I stand up abruptly, pulling Zachary to his feet and the briefcase out of his hands.
“What was that for?” he groans, starting to rub his wrists just, unfortunately for him, as I pull him aggressively to one of the many windows. We look out together, Zachary reacting quicker than I thought he would.
He picks up the briefcase and smashed it as hard as he can through the window. The glass breaks, falls, and he pulls me away and turns to look at me. “You first.”
“What.”
“We’re escaping, hun.” he raises his non-handcuffed hand and drags his thumb under my eye, catching a tear I didn’t know was there and smiles sadly, pulling me in for a hug I didn’t know was coming, “Sorry, Dawn,” he whispers, his fingers in my hair, “there’s nothing we can do now but try and stay alive.”
“But-“ I protest.
“Shh…” he waits and listens a moment, then pulls away and looks at me hard. “We are going to jump out of a moving train.”
Hmm. I wonder…what is going through Dawn’s head right now. She is about to jump out the window of a moving train…yeah. So it can’t be all nice, pretty thoughts in her head right now. And there’s this: 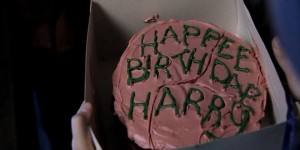 Yeahh. That was yesterday. Harry Potter’s birthday. You forgot all about it, didn’t you?
Anyway. Keep Calm. Drink lemonade. Forget birthdays. *raises eyebrow*
(nothing more to say) Daniela